Create the Things You Wish Existed.

November 15, 2015
This blog post was written before Friday's tragedy in Paris, and I don't wish it to seem like it's insensitive, as it is a societal issue yet on a much larger scale. However the sentiment remains the same. We've got to positively promote what we love instead of bashing what we hate. We need to focus on the light even when there's darkness.

What happened there and what is happening all over the world on a constant basis can definitely increase the feelings of hopelessness. I know I personally found it very upsetting, But akin to the blog post here, we need to focus on the positive; the sense of community and solidarity that spread across the world. After such violent darkness, there was such a beautiful culmination of light. People spread support and hope and the sense that there is so much more good in the world than bad.

It is tragic and scary and it can make the world feel very unsafe and unpredictable, but that's not all there is to be seen, there is so much more to the world that that...

The fastpaced world we live in nowadays could easily be called hectic, among a litany of other things - some more polite than others. To put it mildly; it's busy, it's stressful and it's a bit messy, isn't it? On a day to day basis, we can be inundated with information instantly - our heads fit to burst trying to filter which parts we actually need. There's messages incessantly seeping into every one of our senses about how to live our lives, how to get ahead and how to survive in this 'effed up' world.

Some of us might blame society for the messages we get that we don't really like. The ones that make us believe all the bad bits about life - that it is in fact a major headache, a stress we have to deal with or a challenge we have to try fight. Society is to blame for the stress, anxiety and depression sweeping across us, right?

I'm not denying that it throws its challenges out at us, of course it does. There's a constant barrage of suggestions about how we should act and look and be. I for one have definitely gotten pretty p*ssed off with society on various occasions for its contribution to low self esteem, poor body image and making incredible people feel like they're never enough. But that doesn't mean we have to listen to these messages and it definitely doesn't mean we should let them affect us.

Thinking that way about the environment we live in is never helpful; it just doesn't fix anything. Getting irritated by injustices and pointing fingers of blame doesn't solve the problem. It just keeps us as victims. We become helpless to the power of the general consensus, to the media, to the marketing masterminds who play on our insecurities.  Instead of being participants in our society, we act like we're prisoners of it. But we're not.

Our stresses, struggles and hardships are not all society's fault - Because, guess what, we are society. We all contribute to the collective community that creates our society. So whether it feels like it or not, we actually do have power.

One of my favourite quotes, and yes I do love an oul quote, is 'Create the things you wish existed' That's what I want to do as much as possible because for me, the alternative just means staying frustrated and hopeless. Instead of falling victim to the messed up messages, why not create our own that we actually like and can engage with? Throw out a counter argument to the stuff that grates on you. Why not create your own subculture? Create a society that you want to be a part of.

How can we do that?

We all have one for a reason. When you know that you don't agree with something, put value in what you do agree with. Speak up about what you believe in, what interests you and what you think is right. Everyone has different values and we're not meant to all think the same. Allow yourself to have an opinion that not everyone will agree with. Speak the truth even if your voice shakes and be part of the solution. Silencing yourself doesn't quieten anyone else, it just gives you less influence. Whether one person listens or a hundred do, it makes a difference. A small difference is still a difference.

It's not always easy to speak up. It means dipping into a vulnerable place, where authenticity is rife and we might leave ourselves wide open to criticism. However, when we want to be saying something different, something inherently important to who we are then yeah of course it's raw. It's ours and it's personal. It might hit a nerve or bring out some emotion within us, but it's always worth it. Be strong in what you're passionate about, that energy and commitment will carry the ideas far. You won't need everyone to love what you're saying because you already love it.

- Stand by what you believe in.

Culture is created on 'characteristics and knowledge of a particular group of people, defined by everything from language, religion, cuisine, social habits, music and arts.' Creating your own means being strong in your beliefs, knowing what matters and walking it in your actions everyday. You want to be oozing your values,  an unquestionable quality about you. What you want to promote will be something that you carry with you wherever you go, people can come across you with their own ideas but it doesn't mean that your own beliefs falter. It's just differences of opinion and your own remains intact.

The world is laden with things that I don't understand, that I can't change and that I may feel helpless about. But if I want to see more kindness in the world then I'll start by spreading kindness. If I want more understanding I'll try and understand. What you focus on grows so yeah of course, there's plenty to focus on that'll scare the bejaysus out of you and make you never want to leave your house. Or you can shift your focus and look for the hope. Look for the light. Look for the countries around the world who come together to show that they care.

This blog was created because of the message we wanted to spread. We'll speak about what we believe in whether one person listens or hundreds do. Because this is what's important to us. Hope is to be found everywhere, if you can't see it straightaway, seek it out.

If you can't seek it out, Create It. 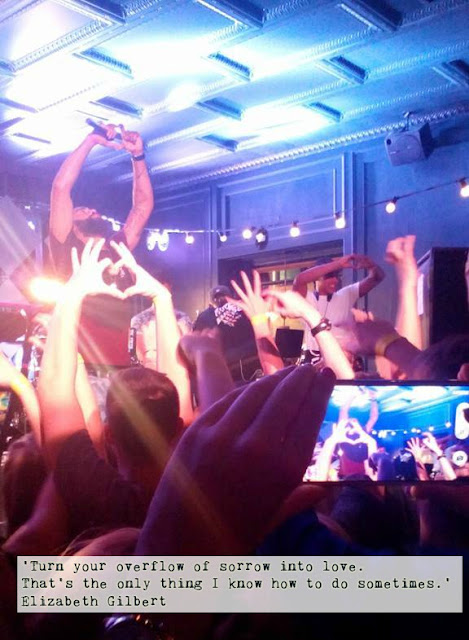 Any thoughts on this? :)