January 19, 2015
So, it's Monday and it's January, and it's allegedly the most depressing day of the year if we want to listen to the media.

That's a pretty heavy introduction to the week if we take these factors and use them as a foundation for our mindset. People bandying about the phrase 'January Blues' and despairing at the dark evenings, and gosh now isn't it only Baltic as well, the roads aren't great etc. etc!

But where does that ever get us?

Today could be a fantastic day, but if we're already being told it's the most depressing day of the year, how much of a chance are we really giving it?

I don't intend to disregard the fact that January, like any day or month, can be challenging, but I want to offer up the possibility that it could be great- either way, it's up to us.

My bus was ten minutes late this morning and I was daunted at the shed load of work I was going in to and the weekend went by too fast and Christmas is a distant memory and it's Monday, in January...

I could easily have let those thoughts continue to race and take over (and ruin) my day, I'm a retired pro at that.

But they were fleeting and instead of fast tracking to an overwhelming whirl of anxiety, I stopped. I heard them and I knew how it would end up if they kept going on. I wouldn't get any joy out of the day, simple as.

I can't control the bus, I will get through my work as I need to, and there's another weekend at the end of this week.

When your mind starts speeding off on a negative train of thought, kick the driver out and take control of that train. Your thoughts are always manageable and even when they seem to be so worryingly true and so overwhelming, there is almost always a counter argument that your positive mind is waiting to give but sometimes it's whispering against the deafening negativity.

I'm sick of the negativity's noise stealing the good out of my day before it has even begun so I don't even entertain it anymore.
I made sure I had my music in my ears, book in hand and brought myself back to being present.

Yes it was a hectic day, but it was also a good day. There were little moments throughout the day that made me smile and those are what makes each day more enjoyable.

I don't know about you, but I don't want to spend every Monday-Thursday wishing it was Friday or the entire month of January wishing for summer. I want to seek out little moments in my Monday that feel as good as any Friday. I want to enjoy the crisp mornings of January and the excuse of the cold to enjoy more coffees. And I want to be helping myself get what I want.

Your day is what you make of it. Of course life can throw all sorts at us, but we're not as bad at catching as we might think. Catch those moments of panic or low moods and either put them down for now or throw them away. We can't avoid the tricky days, we can't create a Tuesday-Sunday week, but we can learn to manage what we have to deal with.

Regardless of what the noise of the media or whoever is saying, find your own voice and decide what kind of day you want.

And give January's poor Mondays a chance! They've done nothing wrong ;) 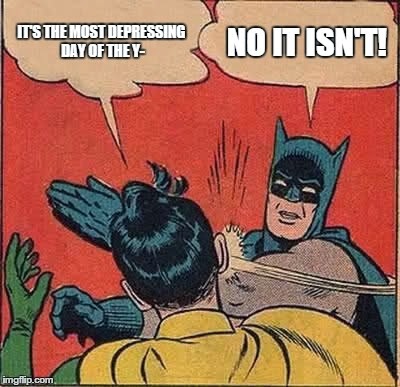